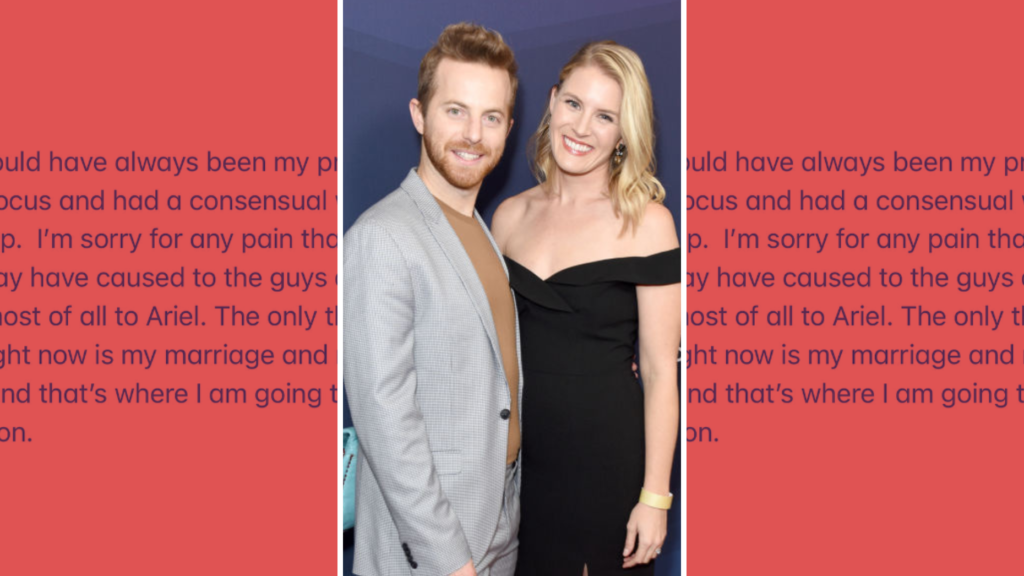 Maybe you are one of those lucky people who listens to classical music or vintage jazz records and reads newspapers that crinkle (when you’re not reading Inman) and never sully yourself with pedestrian pursuits like reality TV and YouTube drama. If so, feel free to shake your head benignly as you follow along with this brief explainer of — the latest YouTube drama.

The rest of you, of course, already know who I’m here to talk about: Ned. The Wife Guy of The Try Guys, the former-Buzzfeeders, now independent content creators, with nearly 8 million subscribers who try things like driving high, wearing drag and eating the entire menu of various chain restaurants.

Why should you care about this?

I get it! You may not keep up with celebrity gossip of any sort, and we’re talking about a marginal celebrity at best. Yet, here’s why I think this matters.

Someday, and that day may never come, something may go wrong in a transaction or on social media or with a client or colleague. Maybe as the head of a brokerage or a big huge company, one of your agents or employees will do something bad, and you’ll need to release a statement.

Somehow, some way, you’re going to have to write an apology or own up to something in some way. And if and when that happens, I want you to know how to do it in a way that shows grace and maturity and professionalism. I don’t want you to make things worse by releasing a statement that makes you sound like the worst possible version of yourself.

Now, back to the drama

Ned Fulmer, now-former Try Guy (more on that later), has now officially been caught up in infidelity, in flagrante delicto with a junior staffer at the channel. The resulting scandal broke the internet and went massively viral, with Gen-Z declaring love dead and most everyone else reading up on it just to try to find out what all the fuss was about.

As the mother of two Gen-Z young adults, I was informed of the news before I had even had a chance to make my coffee Tuesday morning. I had been deep down a Reddit rabbit hole, complete with a thorough accounting of who unfollowed whom on Instagram, by the time most other news outlets had begun to watch their first Try Guys video to try to get up to speed.

I’m not here to shame anyone or to tell you who is at fault, though I have my thoughts on the matter (and a 37-slide PowerPoint that I’ll share with you if you’re interested). What I want to talk about instead are the two statements released in the aftermath of the scandal: One by Ned Fulmer himself and the other by The Try Guys.

Now, I want to make something clear upfront. This scandal did not come as a surprise to anyone. This was not a one-night stand that occurred the night before and required a quick public response. Do you know how I know?

Because The Try Guys sent out a 50 percent off merchandise email a week ago. They were already getting rid of the Ned merch because they knew they were about to rebrand.

That’s why it is so amazing to me that Ned, who was the one who needed a good statement the most, came out with the most amateurish, poorly constructed statement possible. One that almost seemed designed, in fact, to make matters worse instead of better.

Do you have a problem on your hands? Please don’t ask Ned Fulmer to help you solve it because he will only make it terrible. Whatever goodwill his years of public nice-guy content creation might have bought him were erased with this truly awful statement. Ready? Here it is.

Let’s take it line by line, shall we?

“Family should have always been my priority, but I lost focus and had a consensual workplace relationship.”

To start with, I’m not sure how a loss of focus can cause someone to have sex with someone. If you know what he means by that, please do not tell us in the comments.

In addition, the use of “consensual workplace relationship” answers a question no one was asking. There had been no allegations that the relationship was not consensual. Does he think that such allegations are forthcoming?

This is the first lesson to learn, perhaps, from this terrible statement: Don’t say things that nobody has brought up in the first place, especially in such a confusing and round-about way.

“I’m sorry for any pain that my actions may have caused to the guys and the fans but most of all to Ariel.”

This is where we really get to the meat of how bad this statement is. First of all, “any” pain and “may” have caused suggests that there is some doubt about whether having an affair caused pain at all. Maybe everybody was cool with it.

The correct formulation for this statement was thus: “I’m sorry for the pain that my actions caused.” See how simple that is? Made even more effective, in fact, by the omission of “the guys” and “the fans” in front of his wife.

If you’re going to apologize and take responsibility, do so. Words like “may,” “might,” “seem,” “could” and other such qualifiers undermine the sincerity of your message.

“The only thing that matters right now is my marriage and my children, and that’s where I am going to focus my attention.”

This sentence is probably the only one in the statement that is decently constructed. It would be far more effective if he hadn’t spent the first half of the statement talking nonsense before getting to “the only thing that matters.”

Start with the part that has meaning.

Imagine if Ned (or his handlers) had written the statement this way:

The only thing that matters right now is my marriage and my children, and that’s where I am going to focus my attention. That’s, in fact, where my attention should have been all along — however it wasn’t, and, as you have heard by now, I instead participated in an extramarital relationship. I am sorry for the pain that my actions have caused to Ariel and the disappointment that they have caused to my colleagues and my fans. I will try to do better.

Humble, with the emphasis and the responsibility where it needs to be.

The goal of a statement like this is not to “fix” the public’s perception. Some people will love Ned Fulmer no matter what. Others will hate him no matter what.

Many never cared about him before and will carry on not caring.

The goal, from his perspective, is to control the damage and to create a path forward so that he can, eventually, re-enter public and professional life. I don’t know what that will look like, but it won’t be as a member of The Try Guys. Here’s why.

Statement No. 2: The Try Guys

Here’s what their statement looked like. The contrast is pretty incredible:

This is how grown-ups talk. Straightforward, no beating around the bush.

There’s damage to their brand as well, a lot of it, in fact. Instead of trying to make excuses or, worse yet, trying to somehow contain it, lie about it or “both sides” the issue, they just handled it. And when they did that, they told the truth about it.

This is how you make a statement, and it’s how you build trust with your fans, followers and clients, not to mention your employees. When it comes to the way you write and the things you say, be a Zach, Keith and Eugene. Don’t, for the love of God, please, don’t ever be a Ned.