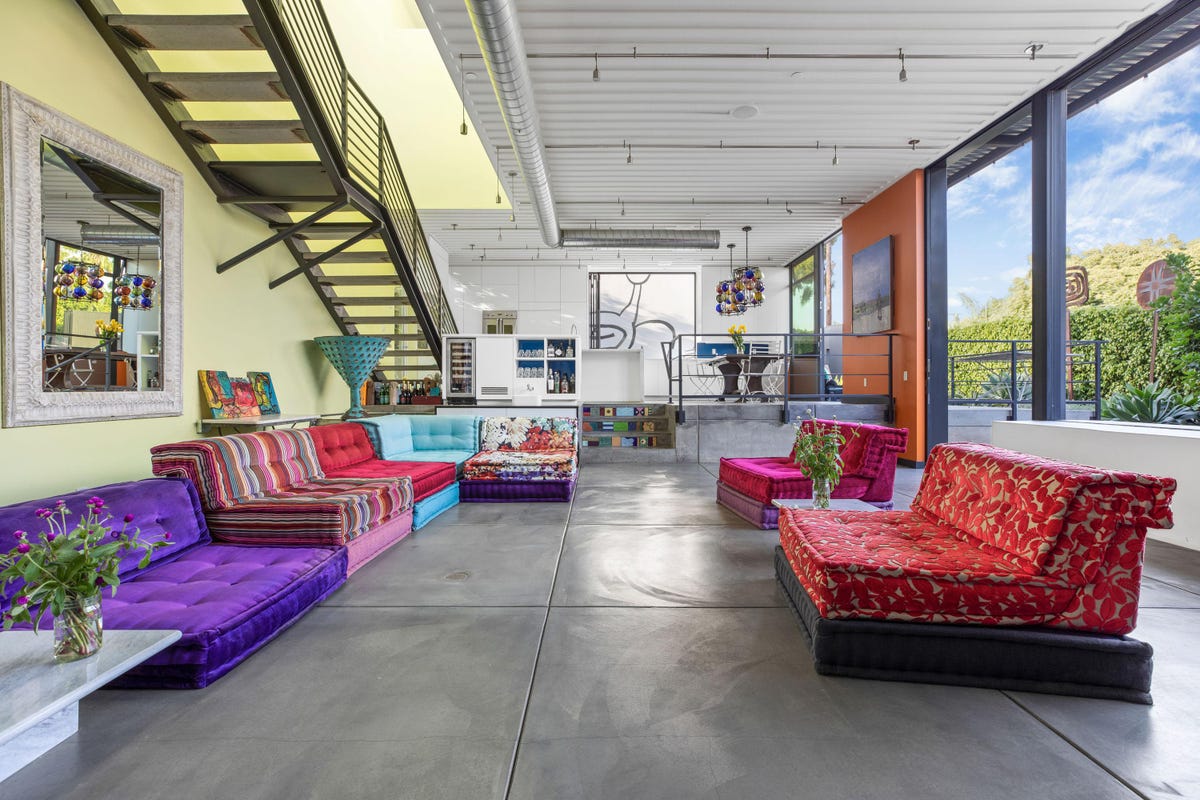 Luxury interior architecture is often designed with art in mind—blank spans of wall for large paintings, open spaces for sculpture. Less common, however, are homes that also display prized pieces of art on their exterior facade, such as this recently listed modern Venice masterpiece.

The anonymous artist’s signature pixelated mosaic work can be seen from the street behind a hedged fence on the outside corner of one of the property’s multiple structures.

Other prominent artworks include a mural paying homage to the late singer-songwriter and artist Daniel Johnston covering the side of the two-story studio/garage.

Walls of glass and bi-folding doors throughout the three-bedroom, five-bathroom compound allow for the many exterior works to be admired from both inside and out.

In the main house, open concept space is gently divided by a split-level floor plan, with stairs ascending to the kitchen and dining area. The airy primary suite encompasses the entire second story.

Also found on the Abbot Kinney adjacent property is a detached studio with a bathroom and a sunken courtyard, two roof decks and two covered parking spaces.

Priced at $8.25 million, the listing is held by Zach Goldsmith of Beverly Hills-based Hilton & Hyland.

Since the late ’90s, Invader’s pixelated pieces inspired by popular 8-bit Atari arcade games have been plastered on the streets of more than 65 cities across 33 countries. Similar to celebrated English artist Banksy, the urban artist’s identity remains unknown.

Hilton & Hyland is a founding member of Forbes Global Properties, a consumer marketplace and membership network of elite brokerages selling the world’s most luxurious homes.

Sellers, spoiled by bubble prices, think they are “giving away” their houses with current price reductions. : RealEstate

Rising mortgage rates are prompting some lenders to downsize to adapt to changing market conditions. But the market shift is also expected to drive mergers and acquisitions. In a shifting real estate market, the guidance...
Read more
July 2, 2022

What is a Master Lease and How Can Investors Use It to Scale?

Property management is a low-margin and labor-intensive business because it’s difficult to maintain a property and keep tenants happy. It’s why many real estate investors outsource property management so they can focus on scaling acquisitions....
Read more
July 1, 2022

True Luxury Is Built To Last