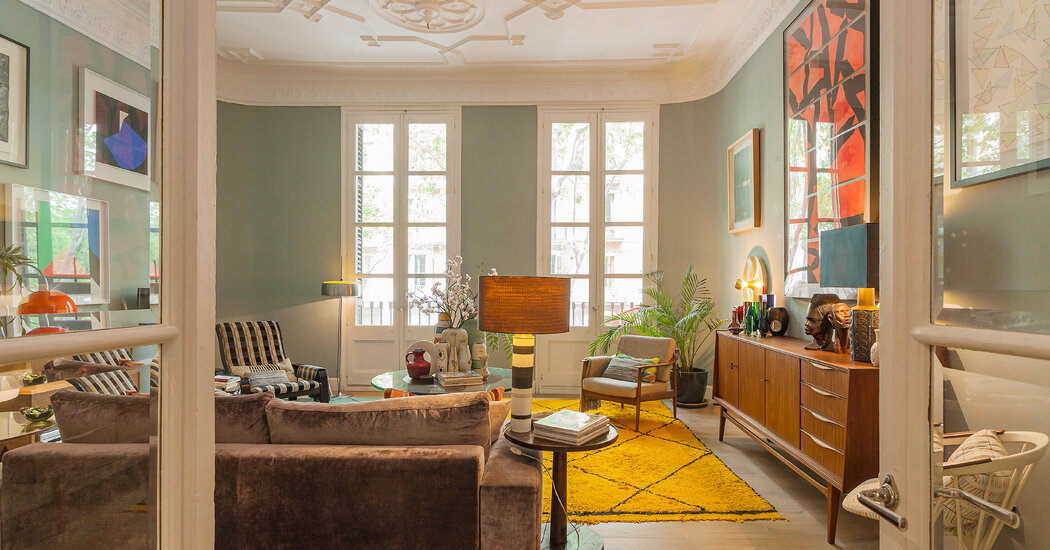 An Updated Two-Bedroom Apartment in Barcelona

This two-bedroom apartment, in the Sant Antoni neighborhood of Barcelona, has an updated interior brightened by multiple outdoor spaces, including a 430-square-foot terrace — a rarity in the center of the city — with zones dedicated to dining, sunbathing and doing laundry.

Carlos Cossio, a senior consultant with Engel & Völkers, which has the listing, noted the home’s “majestic, plastered and preserved ceilings,” as well as the way its mix of textures and colors “enhances the original elements of the house and at the same time provides a new design approach.”

The approximately 1,500-square-foot apartment, on the second floor of a 1900 building, is reached by elevator. Past the foyer, glass doors to the left open to a living room with muted, dusty green walls, ornate plasterwork and two sets of French doors opening onto a balcony that stretches the length of the room. To the right is a large, modern kitchen and dining area with doors to a patio. The kitchen’s original tiles were preserved and rearranged during a full renovation in 2018 and 2019 that also restored iron radiators and double-glazed windows, and added central air-conditioning.

A broad hallway leads to the home’s family quarters. The smaller of the two bedrooms, with a dove gray and bright yellow palette, accesses a hall bathroom. The larger bedroom, on the right, has abstract geometric wallpaper, a built-in wardrobe along two walls and an en suite bathroom with marble tile walls. The bedrooms share the private terrace, which has a shaded section a barbecue area.

There is also access to the building’s storage room and communal rooftop terrace.

Sant Antoni, in Barcelona’s Eixample district, is home to the famed Mercat de Sant Antoni, a large covered market in an 1882 building. Plaça Catalunya and Barcelona’s Gothic cathedral are within walking distance, as are two metro stops along lines Nos. 1 and 2. Josep Tarradellas Barcelona-El Prat Airport is about 10 miles away.

Barcelona, the coastal capital and largest city of the autonomous community of Catalonia, has not seen housing prices and rents grow at the pace they have in other major European cities over the past decade, said Tine Mathiassen, the founder and director of Casamona Real Estate, a Barcelona agency that caters to foreign buyers.

Faced with a housing shortage, Catalonia’s government enacted a rent-control law in 2020 that effectively discouraged investors from buying and spurred landlords to list their homes for sale, particularly in the city center, Ms. Mathiassen said. Then the pandemic arrived to hamper tourism, which severely reduced the pool of buyers and made it harder still for rental properties to turn a profit.

The colliding factors have made Barcelona a tougher sell for investors than in years past. “I think the sellers have a hard time accepting that the prices have gone down,” Ms. Mathiassen said. Meanwhile, potential buyers worry about rent caps: “They’re not ready to pay more for those apartments.”

Maria Larsson, the CEO of Larsson Estate, a boutique agency based in Barcelona, said the city is still “very attractive” to foreign buyers who view real estate as a longer-term investment. Spain’s constitutional crisis of 2017 and 2018, which saw the governments of Spain and Catalonia fight over the latter’s push for independence, dissuaded foreign buyers more than any other development, she added.

Sales in the wider province of Barcelona have bounced back since the dark early days of the pandemic. Spain’s Association of Land Registrars reported an average of 14,450 home sales per quarter in the province during 2021, up from 11,000 in 2020 and 13,794 in 2019.

Prices in the city, however, have struggled to keep pace. In mid-2018, asking prices for secondhand properties sat at about $460 a square foot, according to a report by Barcelona’s City Council, and finished 2021 at $415 a square foot — a drop of about 10 percent.

According to data compiled by Idealista, a leading online property platform in Southern Europe, the average price for a home in Barcelona province during the third quarter of 2021 was about $280 a square foot, 47 percent higher than Spain’s national average.

Prices in the Ciutat Vella district (the “old city”), including the neighborhood of Barceloneta, have fallen by as much as 20 percent since the onset of the pandemic in areas once favored by tourists, Ms. Larsson said.

The luxury market, though, has seen prices rebound by an average of about 7 to 8 percent in the past 12 to 18 months citywide, estimated Mohammad Butt, the Barcelona office director of Lucas Fox, an international luxury agency. “We had a very, very strong 2021, not far off from our results in 2019, which was actually our record year in the company’s history,” Mr. Butt said. “We were surprised by how quickly the market bounced back.”

Lucas Fox’s use of virtual property tours helped sustain remote sales from foreign buyers even during periods of lockdown and restricted travel, he said. The company, which specializes in the foreign market, has also sold more homes to locals motivated by Spain’s low mortgage rates.

Fixed-term mortgage rates “are so attractive, it’s almost like free money,” Mr. Butt said. “So I think a lot of people now are willing to maybe get out of the rental market and can see themselves actually purchasing a property.”

Who Buys in Barcelona

Ms. Mathiassen said the pandemic has prompted more buyers from Scandinavia to leverage their increased home equity to fund vacation-home purchases. These are cash buyers.

She also noted a “slow, slow, slow movement now of Americans,” many of whom want to take advantage of Spain’s Golden Visa program, which offers temporary residency to foreigners who invest of 500,000 euros ($565,000) in real estate.

Ms. Larsson said most of her buyers come from France, Italy and other European nations, with a smattering from Russia and China. She estimated that foreigners make up fewer than 15 percent of buyers in Barcelona, though “the ratio is much, much higher” in tourist-friendly areas.

Those include Ciutat Vella, where you “literally feel like you live in a movie when you look out, it’s absolutely gorgeous,” she said, and in Eixample, known for its metropolitan lifestyle. Also popular is the neighborhood of Poblenou, on the Mediterranean coast, with townhouses and converted industrial buildings.

Mr. Butt’s agency typically sells to buyers from Northern Europe, the United States, the United Arab Emirates and Saudi Arabia. It has also started seeing the return of British buyers, who hadn’t needed a visa to reside in Spain before the Brexit referendum. “That’s a whole new pool of buyers that didn’t need a golden visa four or five years ago, but now they do,” he said.

Foreigners are not restricted from buying real estate in Spain. Buyers pay a 10 percent property transfer tax, plus another roughly 2 percent for notary and legal costs. New-construction properties incur an additional stamp duty of 1.5 percent, Mr. Butt said. He advises international buyers to hire an English-speaking lawyer who will carry out due diligence and prepare contracts.

Banks require a larger down payment for second residences, regardless of whether the buyer is Spanish or international, Ms. Larsson said.

“You’re being treated exactly like a Spanish citizen is,” she said. “Only the difference is that most of the times when foreigners buy here, it’s a second home.”

previousRyan Serhant On Explosive Growth In 2021, Inman Connect Memories
nextThe ‘Green Lease’ Is The Next Phase Of Built Environment Sustainability