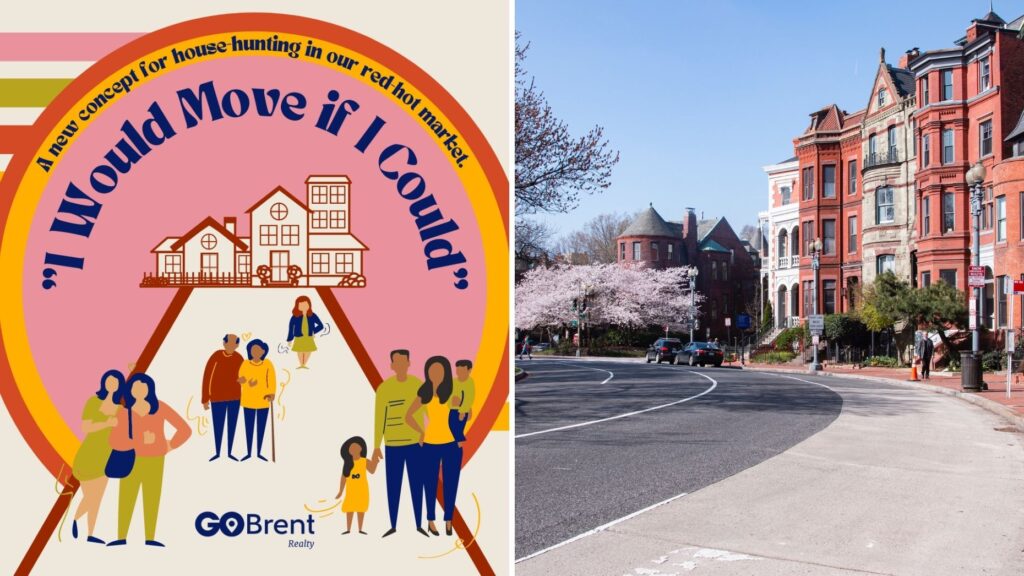 The online database is free for homeowners located in the Washington, D.C., metro area, and homeowners can opt to provide as much or as little personal information to Go Brent as they like.

“Matchmaker, matchmaker, make me a [house] match?” Tzeitel might have sung to her sisters today in a modern retelling of the musical Fiddler on the Roof.

D.C. metro-based brokerage Go Brent Realty is banking that homebuyers and sellers are yearning for alternative solutions when it comes to transactions in today’s market, where inventory remains historically low. That’s why the company has launched “I Would Move If I Could,” a “matchmaking” database for homeowners who feel stuck due to the limited options currently available or believe they can’t afford to buy without selling first.

“The inventory crisis in our area has been building for over a decade and I don’t see it improving any time soon,” Liz Brent, founder and principal broker of Go Brent Realty, said in a statement. “We know there are many homeowners out there who would move if they could. I’m looking for creative ways to help them. Anytime someone is able to get a home in a way that they haven’t before … that’s a win.”

The online database can be accessed at iwouldmoveificould.com and is free to homeowners located in the Washington, D.C., metro area, which is where Brent’s brokerage operates and the geographical scope that the database will cover. Homeowners can opt to provide as much or as little information to Go Brent as they like, including motivation for moving, what type of home they’re seeking, desired location or distance to public transportation and more. They can also remove or edit their information in the database at any time.

“The primary concept is, we get as many people in a relatively small geographic area that are interested in staying in that area,” Brent explained to Inman.

She noted that she’s not necessarily looking for a 1:1 trade between two homeowners, but seeking out a chain of satisfying moves for different homeowners in the area as opportunities arise.

Once homeowners fill out a questionnaire, they’ll only be contacted by Brent if another homeowner profile surfaces that seems like a good match for their home search needs, and for any other follow-up questions about their current situation. By signing up for the database, consumers are not contracted with Go Brent Realty in any way and are free to use whatever outside agent as representation that they wish. They won’t be put on any email or mailing lists, but only contacted regarding their quest to move.

The database is also not consumer-to-consumer facing, meaning homeowners who submit their information through the database can’t view profiles or properties of others who have used the database. Only the individual consumer and Brent will ever see the information they’ve submitted. For now, Brent is handling all the “matchmaking” herself, but she said that if demand grows enough, she’ll likely need to designate more agents within her brokerage to help filter through requests.

After years of working with clients who felt they needed to downsize, upsize, or move closer to family, but felt like they couldn’t because of the current market constrictions, Brent realized the need for such a service. She told Inman it was a testament to the indie brokerage model that she could develop such an idea and put it into action herself within just a few years.

Information gleaned from the database could also help reveal emerging trends about what the kind of housing consumers are moving toward in the future, from condos to duplexes and more, Brent added in a press statement.

“Not only does the inventory needed not exist, but also the type of housing that people want doesn’t exist,” she said.

Within the first 24 hours of launching the website, Brent said she already had received about 30 homeowner questionnaires.

“We are not trying to avoid putting homes on the market,” Brent clarified to Inman. The database is explicitly for homeowners who feel for some reason like they face barriers to moving (whether psychological, financial or otherwise), differentiating the service from similar-sounding pocket listing databases or networks, she specified further.

Any seller who is ready to list their home should do so right away, she said.

Go Brent Realty was established in 2018 and has offices located in downtown Silver Spring and Hyattsville, Maryland.

previousDitching the “American Dream” & Finding Ways to Live a Wealthier Life
nextA Second Bedroom on the Upper West Side for Under $800,000? These Were Their Options.